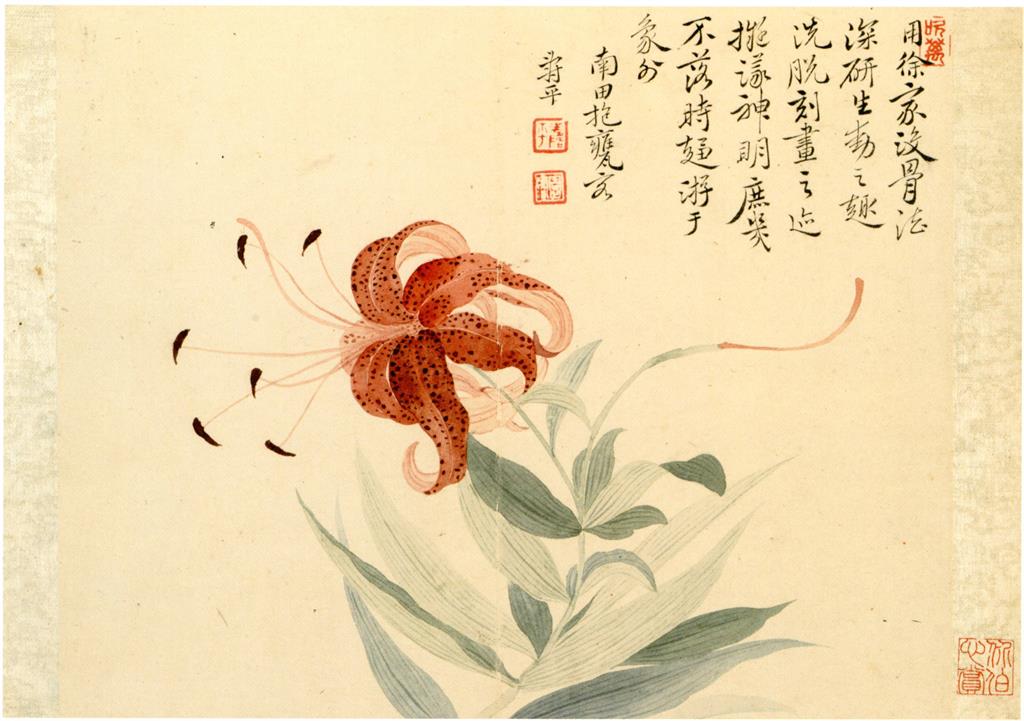 Yun Shouping has been called one of the “Six Masters of the Qing Dynasty (1644-1911).” Also known by his sobriquet “Nantian” or “Southern fields,” he was renowned for his bird and flower painting.

Yun had an important influence on the painting of Ju Lian, who was the teacher of the artist Gao Jianfu (painter of the hanging scroll of lilies in this exhibition), and who transported Yun’s stylistic practices forward to the Lingnan school. His colour washes and “boneless” style of painting (lacking outlines) stood in contrast to the traditional styles favoured by men and women of letters that focused heavily on tonal gradations of ink and tangible brushstrokes. Yun’s delicate surface textures created through the use of colour show a careful consideration of the lily’s finer details, not only the flowers. After dropping its petals the naked stigma projecting to the right demonstrates a less recognizable phase in the life cycle of the lily.

Yun worked with the theory of xiesheng 寫生 painting that draws equivalences between painting and the form of an object, but is directly translated as “sketching life.” It did not always involve painting a specimen, nor did it necessarily involve an aim towards accurate depiction of physical appearance. What was meant by “painting life”, then? It was an effort to capture the intangible nature or spirit of the object. Yun’s inscription touches on both of these concepts:

Using the mogu (ink-washing) technique, [I] deeply researched the sense of lifelikeness, washing off the trace of meticulous description and seeking to draw the spirit [of the flower], so that hopefully [I] would not go with the trend of the time [and] could wander beyond the appearance. 用徐家沒骨法，深研生動之趣，洗脫刻畫之跡，擬議神明，庶几不落時趨，遊於象外。

It seems as though there is a conflict between scientific practice and sentimental representation in this inscription – how can one simultaneously do exhaustive research while discarding meticulous description? As a painter, someone who visually represents a subject, what does it mean to surpass appearance? And once again we find the question, what is the essence of a lily?