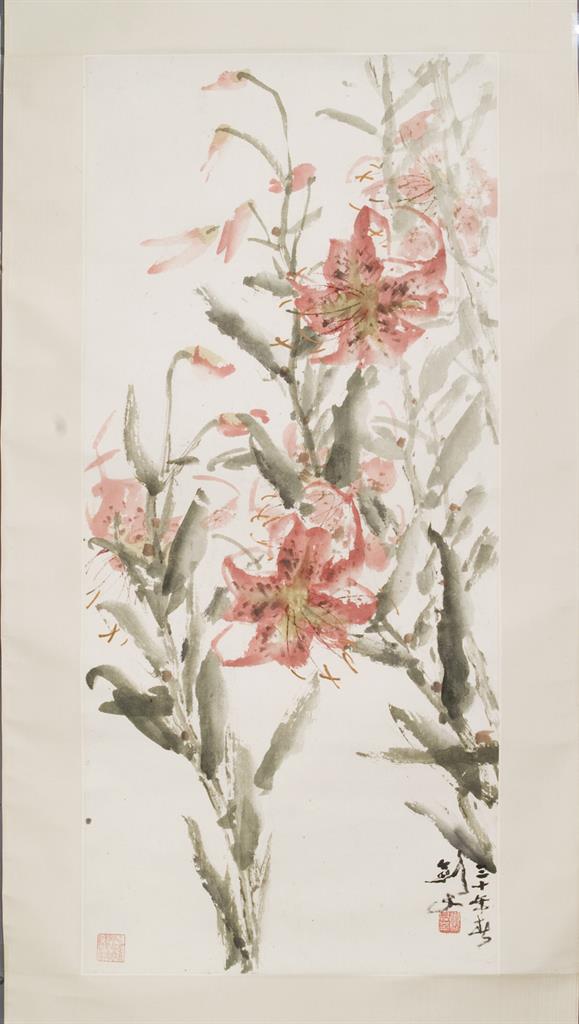 Look closely. Do you see any dark contour lines masked by color in this painting? This is a naturalistic painting that uses color and no contour lines. These lilies are painted by a few bold and dry brush strokes illustrating the lower leaves and the flowers, and soft washes showing the leaves and flower buds that are in the background as if fading into a mist. But are these lilies blossoming, are they withered, or were they in full bloom before wind stripped them of their petals? This painting invites you to look close and look long. It invites you to contemplate what a lily is.

The lily (baihehua 百合花) symbolizes peace, harmony and life-long union in Chinese art. Daylilies that are summer flowers and local to Asia were famously depicted by Yun Shouping, a distinguished Chinese artist who influenced Gao Jianfu’s master, Ju Lian. Yun Shouping accompanies his painting with a poem that reads: “How to make a peaceful courtyard? Plant this often. Loving its bright foliage is enough to forget worries” (Welch, 28).

Gao Jianfu (1879-1951) was an artist and a revolutionary who lived in Canton at the turn-of-the-century China. He was active through the social and cultural changes of his age and helped to create a new Chinese art that was modern. Gao Jianfu’s younger brother, Gao Qifeng, was also a painter. After learning the basics of Chinese painting from the celebrated Cantonese artist Ju Lian, Gao Jianfu travelled to Japan to learn the science of entomology, and his brother joined him later. Gao Jianfu started by painting insects on porcelain but later in his life, he abandoned that for brush-and-ink painting and garnered a reputation for his realist–poetic paintings. Permeating expressively textured brush strokes of Gao Jianfu are close observations of nature and scientific knowledge of the subject matter—flora and fauna.

Now take a second long look at these expressive lilies. What sensation does it evoke within you? Can you imagine Gao Jianfu painting them?