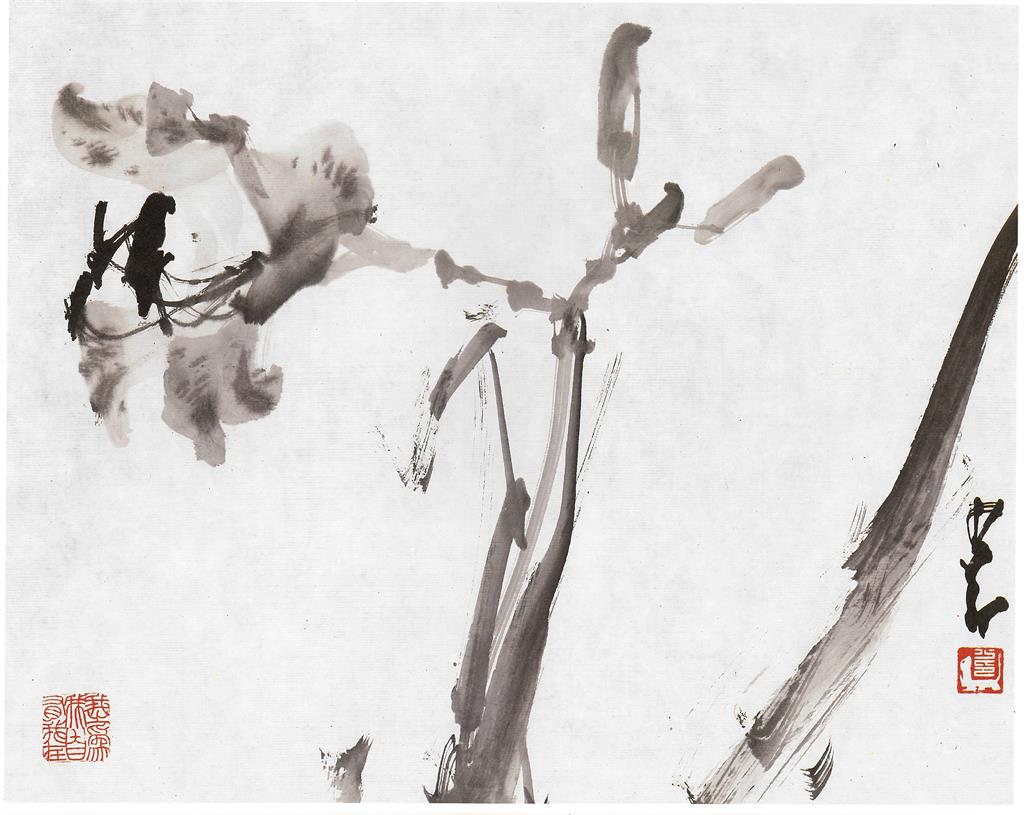 Chao Shao-an acquired his skills through his study with Gao Qifeng, the younger brother of Gao Jianfu (whose painting is featured in this exhibition), and he went on to become a prominent member of the second generation of the Lingnan School. Chao took to heart the ethos of the Lingnan tradition and experimentally borrowed brush idioms from other painting schools in Japan and China, operating primarily from a philosophy rather than a particular means of representation.

Chao Shao-an painted this lily in a wet brush style. Chao’s lily has resulted from a more expressive brush stroke than Yun Shouping’s tiger lily (also included in this exhibition). However, similarities lurk between the two paintings.  The texture communicated through the striations on the leaves is reminiscent of the boneless style in which Yun Shouping depicted the spirit of his lily’s leaves. Two life stages appear in each as a lily arrives at a blossom in the younger artist’s picture, and in the senior artist’s, it passes out of the flowering phase. The intention to depict the unique spirit or identity of the subject matter asks both artists and viewer to consider not only what is represented in the painting, but also what it might evoke.

Perhaps it is this quality which draws us in, the lingering influence from the philosophy of Yun Shouping – an attention to the lifelikenessof the lily, rather than its detailed appearance. The seal on the left of the painting says: I am who I am because I am here.

This sentiment is worth a prolonged pause. To whom does the “I” refer? The lily, the painter, the viewer? And what is the temporal-spatial “here”? Inside the painting? The static time and place of the paintings creation? A fluid concept of space and time in which the painting’s many viewers have existed in the past and will continue to dwell in the future?  If Chao is working with Yun Shouping’s xiesheng“drawing from life” methodology, what lifelikeness is captured in the painting?

The contact between brush and paper, a human and a lily, Chao and the viewer are all a sensuous experience. Chao is painting from the position that he is part of the world, not a separate observer of it. Perhaps the essence of the lily isn’t held by its representation on the canvas but within the relationship between the “I” and the sensuousness of the present moment, the “here.”