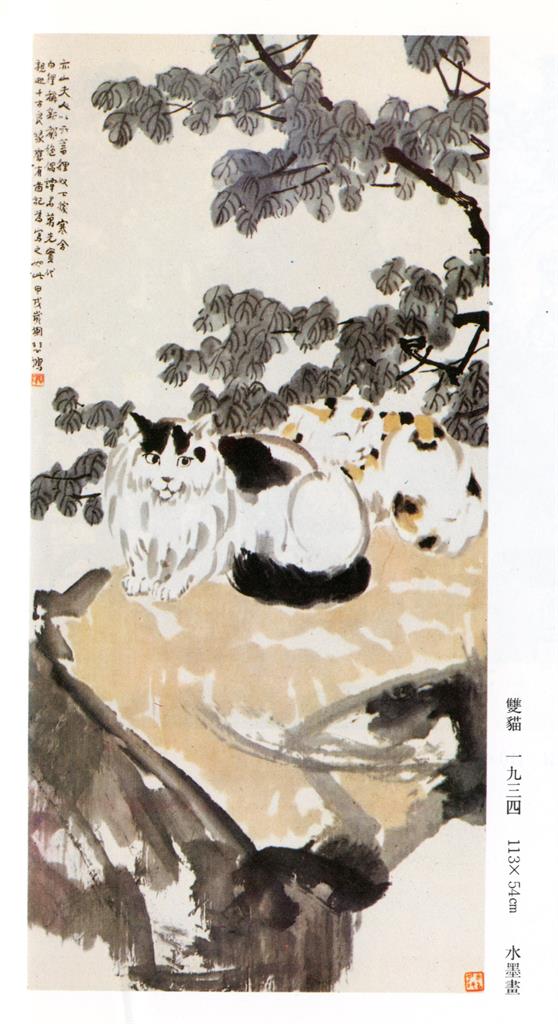 Xu Beihong paints two cats and the ground beneath with thick washes of colour. Xu often adds human attributes to his animals to act as a mediator to express his own feelings. He does so with the grinning expression of the white cat but also with the mysterious, stern form of the black cat.

Xu is known as the pioneer of modern Chinese painting as he developed a path for Chinese artists to learn Western styles of painting. This preference for European-style “realism” developed through the radical reformers Cai Yuanpei 蔡元培 and Kang Youwei 康有为. With similar conclusions, they held the beliefs that scientific realism in Western styles could accompany the advances within modern Chinese intellectuals. Xu was able to introduce realist styles to China by being one of the first students from China to study art in Europe. While studying in Europe, Xu and his wife ended up living in Berlin for a period of time. They spent a lot of time at the Berlin Zoo where Xu closely sketched the lions which would later help him draft his cat paintings. Such influence from lions is reflected in Unconcernedas the cats share similar characteristics to a lion in their thick fur and positions in relation to each other within the composition.

Xu painted Unconcernedin 1934, three years after the Japanese forcefully occupied Manchuria in northeast China. The resistance towards the Japanese created two feelings that Xu believed the population of China also felt. He was not too worried about the Japanese given the ability for people to get past resistance and fear. He represents this thought through the white cat as it lays with a grinning expression. However, Xu also knew that he had to be alert and willing to fight for his nation, which translates to the black cat’s representation. Xu represents himself though the two cats but he is also sending a message on behalf of the population of China. As an artist, Xu’s goal was to create art that encompassed the pride and strength that he felt the Chinese population had. His views of the war were also the people’s view. The two cats portray the qualities that Xu felt the people of China needed in order to resist the Japanese.

Xu attributes contrasting expressions to the cats even though he is representing himself through both of them. It allows him to showcase his multiple feelings in one composition. The expression of the white cat is exaggerated to look more human-like, displaying a lack of fear -- it is in no immediate danger. It is content, calm, and not worried about its surroundings. In contrast to the white cat, the black cat is in a protective stance as it looks over its shoulder seeking out potential danger. An inscription is placed within the black cat’s view, as if it has just spoken the words that are scripted onto the painting. This inscription acts as a direct link to Xu, voicing his concerns about Japanese occupation of northeast China.

Indifference is their best approach. To be muddleheaded is natural. They have been used to playing around since they were young. Extreme danger will not shock them.Beihong [painted] in winter 1934.