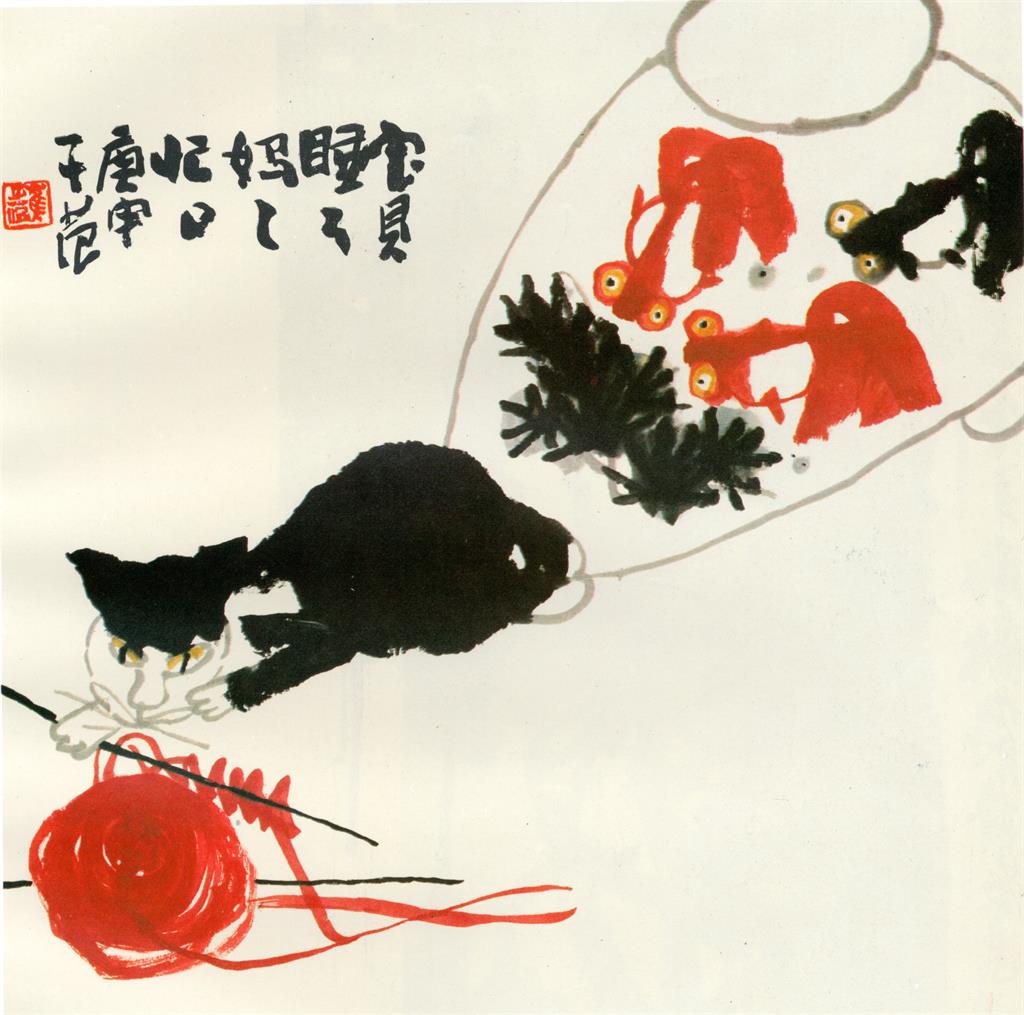 The relationship between a cat and a goldfish is not often a friendly one. In Cat and Goldfish, we see a cat in the centre of the composition, playing with a ball of yarn while the fish observes through the clear glass bowl. However, the cat does not pay attention to the fish and instead occupies its time with the red-threaded ball of yarn. This is a simple composition but the inscription that Cui Zifan incorporates adds a narrative to the painting. The inscription describes the “mother is busy as baby sleeps.” The painting is not depicting the goldfish and cat as enemies but instead they have a mother and child relationship.

Cui Zifan’s own experiences contribute to his expressive style. He started to paint quite late in his lifetime, so that a lot of his influences date from the 1920s to the 1940s, primarily through his experience of the Second Sino-Japanese war. Before his success as an artist, Cui lived in Yan’an during a time of revolutionary change in China. For many years before becoming a painter, Cui fought in the war against Japan and continued working as an army administrator. During Cui’s time working in the army, he was introduced to a famous guohua (国画) “national painting” artist named Qi Baishi 齐白石. He went on to follow Qi in the Central Academy of Fine Arts in Beijing and through learning from Qi, Cui rose through his talents and accomplishments. Qi is an accomplished artist, known for his expressive styles that compliment his appreciation for nature. Cui similarly uses the element of ink wash painting from traditional styles learnt through the academy, but makes the painting his own through the brush strokes that are full of spontaneity and energy. The black ink is incorporated into most of the composition but contrasts with the rich, bold red colours to keep the paintings full of excitement. He is not copying from artists in the past. Instead he builds on his teacher’s expressive styles while creating his own.

Cui is not reflecting his own expression or personal emotions into the painting but adds a human element through the cat’s touch on the knitting needle. The motherly cat fiddles around with the ball of yarn. Cui uses expressive brush strokes to make the yarn feel as though it is moving because the cat is creating something with it – as if the cat’s paw is in a position from which it might start knitting. The baby fish are close enough that the mother can keep an eye on them. They swim in a glass container allowing the cat’s maternal gaze to watch over them -- if she were less distracted, but then one wonders what maternal attention would produce here. Cui’s expressive style creates a dynamic story for the cat and its babies.