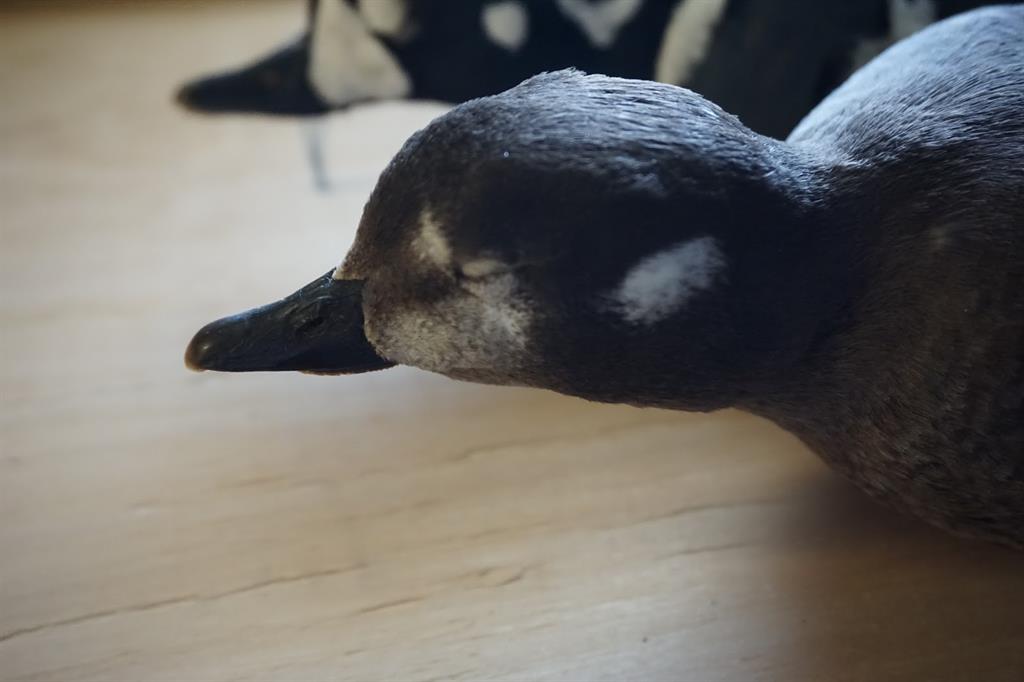 One of the most enduring forms of scientific bird specimen is the study skin. A study skin is prepared by carefully removing most of the dead bird’s body – particularly soft organ tissues which decompose quickly – from its skin, poisoning the skin with arsenic or borax to prevent insect infestation, and stuffing it with cotton in an approximation of the live animal. The resulting specimen typically lays flat on its back with folded wings and feet, its neck and beak are positioned parallel to its torso. This compact posture is designed to facilitate storing multiple specimens in enclosed cabinets which reduce exposure to light and pests, as these can discolour and break down organic tissue. Scientists use study skins to collect biometric information, such as wing length and beak size; information about visible variance, such as of feather colour, in populations; and, more recently, for DNA testing.

As with other organs, eyes are quick to decompose after death and so are removed and replaced with clean white cotton. A 1921 Handbook of instructions for collectors published by the Natural History Museum of London notes the aesthetic importance of this practice: “fine bleached cotton-wool is necessary for the filling in of the eye-sockets of the specimens. Nothing conduces more to the neat appearance of a properly prepared skin of a bird than the aspect of the head and eyes.” Is the privileging of the appearance of birds’ heads and eyes a mere anthropomorphic extension of human preoccupations with the face as a site of visual communication? Why might a specimen’s absent eyes deserve such careful consideration? A number of formal connections emerge with this question: the specimen’s substitute white eyes recall cataracts, a trance, the milky eyes of unpainted classical marble statues, and endless other cultural allusions. But to follow this line of thinking would ignore the premises under which these scientific specimens are made.

Unlike lifelike taxidermic mounts, which are adorned with glass eyes, study skins are not intended for decoration or public display. They are not conceived as objects of contemplation or visual delight, but rather as material receptacles of data. Ornithological specimens in the form of bird skins literalize notions of animals as objects in the service of human knowledge. The removal of the eye suggests the symbolic value placed on looking. Remarking on the cultural marginalization of animals within processes of 20th-century modernization, John Berger (1977) notes that animal capacity to observe humans has lost all significance, while human observation of animals contributes to our domination of them. If vision animates and grants agency, then removing eyes, in addition to serving the function of material preservation, helps situate a study skin as an object, no longer a living bird capable of returning an inquisitive gaze.