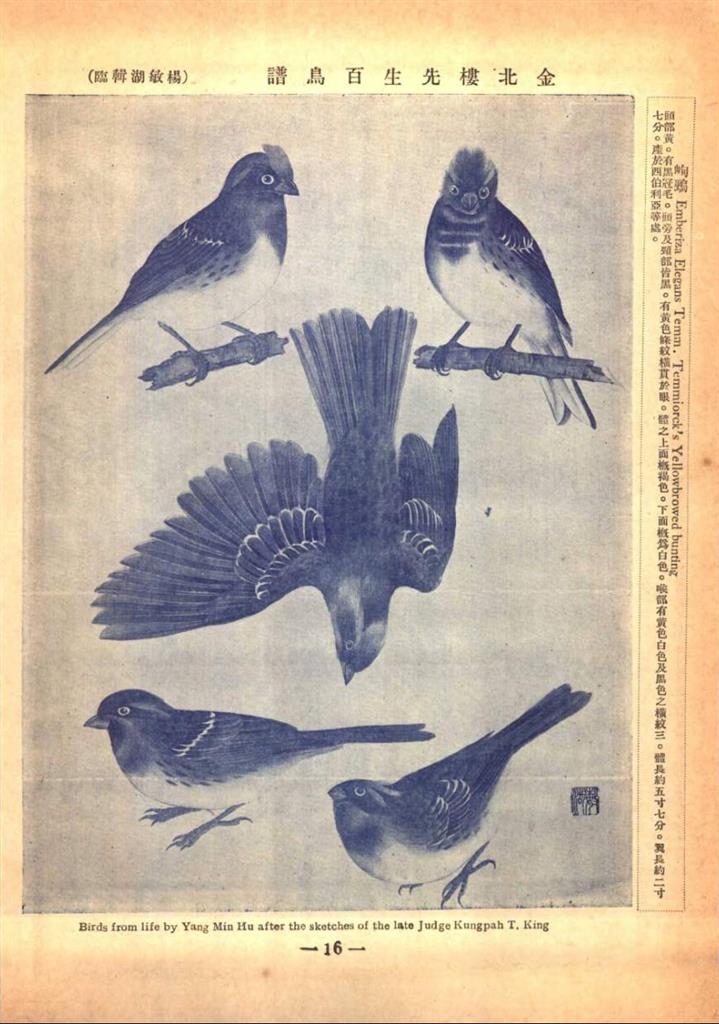 Jin Cheng (Kung-pah King, 1878-1926) was a government official and an influential artist in Beijing during the 1910s and 1920s who involved himself in art pedagogy and various cultural activities. In May 1920 Jin co-founded the Chinese Painting Research Society (the CPRS) with other established artists in Beijing. In 1925, when American Geologist Amadeus William Grabau (1870-1946) and Jin Shuchu (King Scohtsu), Jin Cheng’s brother, co-founded the Peking Laboratory of Natural History, Jin Cheng took charge of the Department of Illustration. According to the leaflet of the Laboratory, he “was to prepare the paintings of the Chinese birds himself” and was “giving training free-of-charge to a number of the younger Chinse artists, to enable them to become experts in the accurate and scientific delineation of the animals and plants of China.”

When Jin passed away in 1926, his bird illustration project remained unfinished. In 1932, the art journal Hushe yuekan 湖社月刊 (Monthly of the Hu Society), founded by members of the CPRS, began to publish Jin’s unfinished bird illustrations. One of Jin’s disciples, Yang Min (Minhu 敏湖, Xingpo 惺坡), was in charge of copying Jin’s sketches to make them publishable. It was noted in the preface that these birds were painted from specimens collected during Jin’s service at the Laboratory, and they were “intended to be depicted scientifically for biologists to study.”

Although Jin’s study of the bird’s various movements in its “living” status can be traced to the tradition of bird-and-flower paintings from the Five Dynasties period (c. 10thcentury), the bird depicted from its back with one wing extended, depicted in the center, is telling of Jin’s “scientific” method of illustrating bird specimens. The finished illustration of each bird study also recalls the composition of a typical bird-and-flower painting. But what makes Jin’s “bird-and-flower” illustration modern is its text identifying the species of the bird and the plant in the manner of a modern biological encyclopedia. So on the one hand, Jin’s bird illustrations remind us of their original intention for scientific publication, although the style and composition are so like those of traditional bird-and-flower painting in China. On the other hand, the practice of modeling from a specimen and the accompanying taxonomical text provides evidence of how artists practicing a traditional style of painting in the 20thcentury China began to look at birds with a “modern scientific” eye.