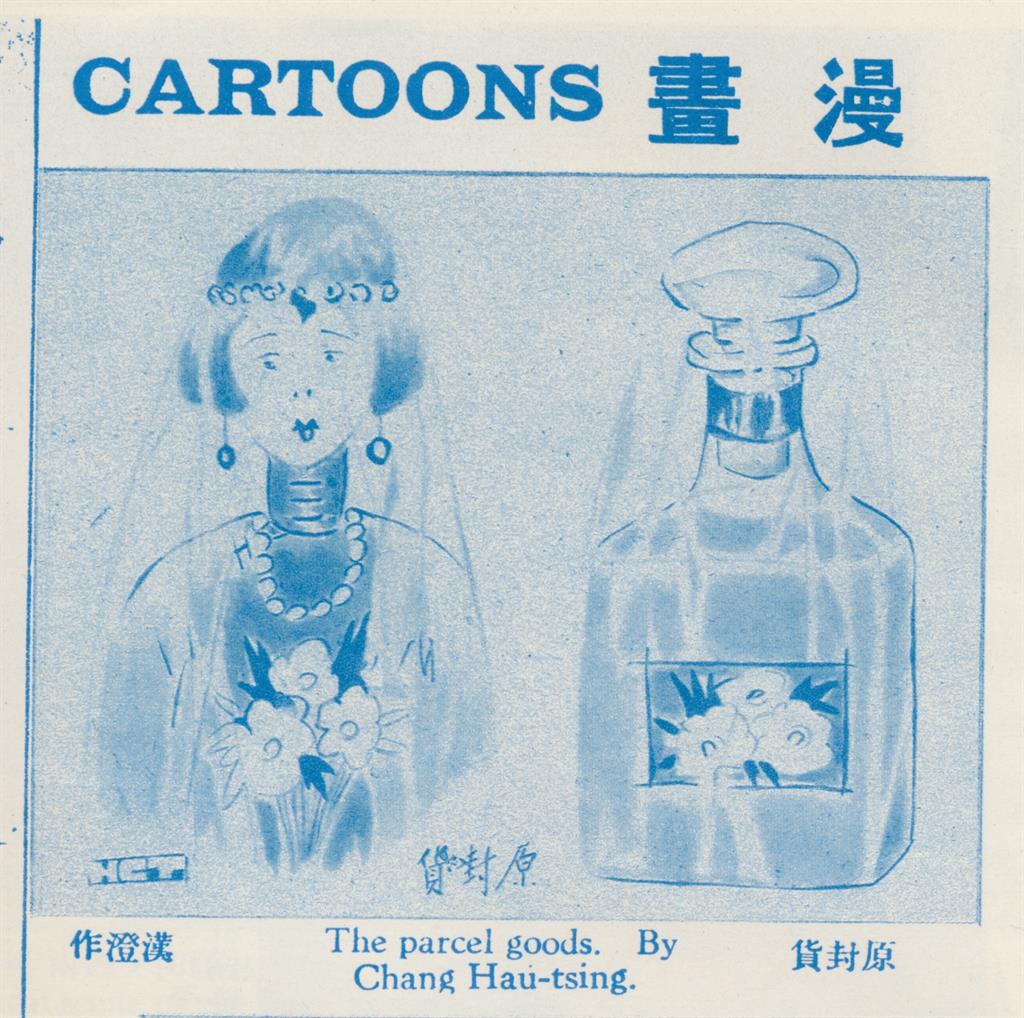 During the Republican era, women were perceived as the mothers of future Chinese citizens, and their bodies were thus seen as central to the country’s progress. The female body was also tied to ideas of economic progress and was featured heavily in advertisements for commercial items like fragrances. These advertisements were a large part of Liangyou’s content and helped define the female body as a commercial product. Additionally, advertisements helped articulate women's roles in rapidly changing Chinese society.

In this cartoon (manhua) the female body appears as a commodity by imitating the form of a perfume bottle. Like the perfume bottle, she herself is also wrapped up. Whereas she is wrapped in a veil, which associates her with marriage and potential motherhood, the perfume bottle is wrapped in plastic. Similarly, the absence of human anatomy in depicting her body emphasizes her symbolic relationship with the perfume bottle. The only part of this cartoon that identifies her as human is her face, which is lightly detailed with downcast eyes, raised eyebrows, and pursed lips. Her expression links her to the female figures seen in commercial paintings of beautiful women (shinü) that were popular in the late Qing dynasty. In portraying these figures, particular attention was paid to their clothes and accessories. However, details of their faces lacked personality; instead their expressionless faces were characterized by elegantly arched eyebrows and pursed lips (Waara, passim). These features were emulated and reproduced in the Republican era by magazines such as Liangyou.Theywere utilizedas a means of representing female role models and showcasing the latest fashion trends. The use of traditional motifs contradicts this figure as an image of modernity; it also reinforces the woman’s subjectivity because her lowered gaze limits visual communication with the viewer.

Like the beautiful women featured in late Qing commercial paintings, this figure can be a role model to be imitated, not to mention monitored and regulated by shifting definitions of gender roles. The way the female figure in this cartoon is packaged is indicative of the role of women as moralizing figures in Chinese culture. Her veil as a version of the perfume bottle wrapper suggests that, like the perfume bottle she is untouched. This implication is affirmed by the title of the drawing which references a traditional Chinese idiom related to virginity. This cartoon can be viewed as a critique of the commodification of women’s bodies by affiliating the woman’s form with a mass-produced object. But, it can also be seen as a representation of natural womanhood, an interest of vernacular sociology defined by intellectual experiences, social life, and the body.