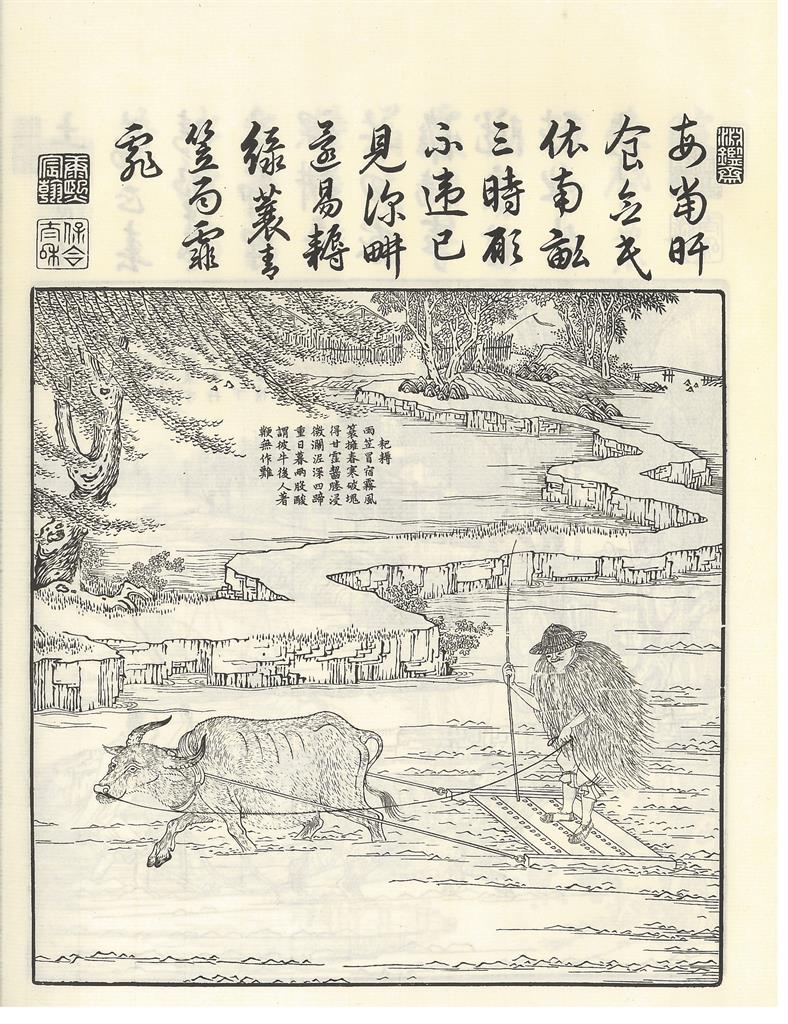 “Pictures of Tilling and Weaving” are a genre of paintings that represent the procedures of the agrarian laborer as well as those of people working in the silk industry. Beginning in the Song dynasty (960-1279), these images were favored by imperial courts and supporters of governmental policies. The pictures legitimized ideals: the ideal of good government in which agriculture and sericulture flourished, as well idealized economic class structures, and even, possibly social gender roles. The pictures of the families - the husbands tilling, the wives weaving silk cloth -- were used as a means of promoting social stability as well as the stability of Chinese court and economy.

Two parts of the agrarian farming process are showcased in the open pages of this early Qing-dynasty book: sowing the rice field (on the left), and plowing a rice paddy (on the right). The laborer’s faces are serene as they fulfill their tasks. Their satisfied expressions reflect the stable Qing administration that supports them. This is in sharp contrast with the laborers of the agrarian lands shown in the Nian Battlescene (the focal painting in this part of the exhibition). Paradoxically, even though the painting of the battle was commissioned by the court, it appears that the government is far less stable -- not because it is struggling to quash the Nian rebellion, which it appears to be doing with infinite order and strength, but because agrarian laborers are shown to have abandoned their lands and are fleeing the ensuing violence. Whereas the Chinese government’s stability lent itself to depictions of serene and dedicated farmers in Yuzhi Gengzhi tu, an implied lack of stability in the government shows farmers with all of their worldly goods, moving out of the pictorial frame in the Nian Battle scene. They are no longer tilling the land, but fleeing the composition, effectively war refugees. Where there is stable government and serene, focused farmers working their land in Yuzhi Gengzhi tu, the lack of governmental stability in the Nian Battle scene gives rise to farmers fleeing their lands as refugees.