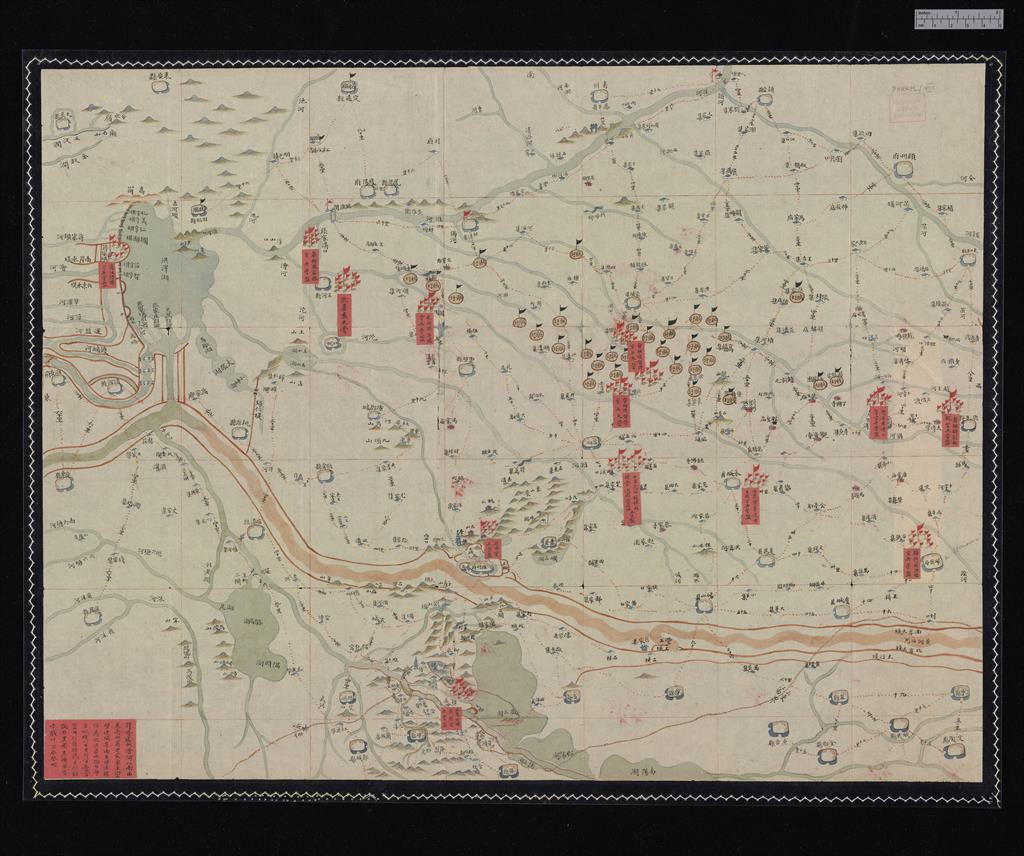 Military maps aim to be as accurate as possible, so that battle strategy can be planned effectively. The “Map of the topographical and military situation of soldiers’ camps in the Huaibei region,” a scouting map drafted and consulted during the extended battle between the Qing army and the rebelling Nians, is no exception. Terrain and the built environment (Buddhist and local place temples, walled villages, small settlements, a tower and a pagoda or two) is measured carefully against thinly ruled red lines of a hand-drawn grid on thick paper. The Yellow River snakes across the bottom of the map – which is the northern part of the map, it turns out, as the cardinal directions here are oriented similarly to contemporary Chinese maps much like the mid-nineteenth century scroll map of the Yellow River also featured in this exhibition. In this case, the northeastern province of Shandong is at the bottom, the southern province of Anhui is at the top, and eastern Jiangsu is on the left (though in the map, a thin brown boundary demarcating north from south is described in more encompassing terms as “Shandong and the Jiangnan region south of the river”). Red banners and cartouches mark the imperial garrisons under provincial commanders; black flags, the “bandit encampments” (zeiwei).

But the accuracy of the mapis not strictly scientific, as we might imagine a grid map would be. Dotted red pathways indicate the number of liin marching distance, sometimes from one undefined spot to the next, sometimes radiating from the origins of a prefecture-level city, such as Suzhou 宿州 at the map’s centre. The labels face the direction of the march; language orients not only to named place but space. What effectively is being mapped is the movement of the Qing army. A narrative is thus told through the interaction between the landscape and the soldiers and rebels—a pictorial and spatial strategy that is almost identical to the Battle Scene of Nian Rebellion in this part of the exhibition. This map is thus more than just an instrument, but rather is itself, in a sense, on the move. For viewers, by visualizing the mapped places, they are also, in a cartographic way, visualizing the battle.