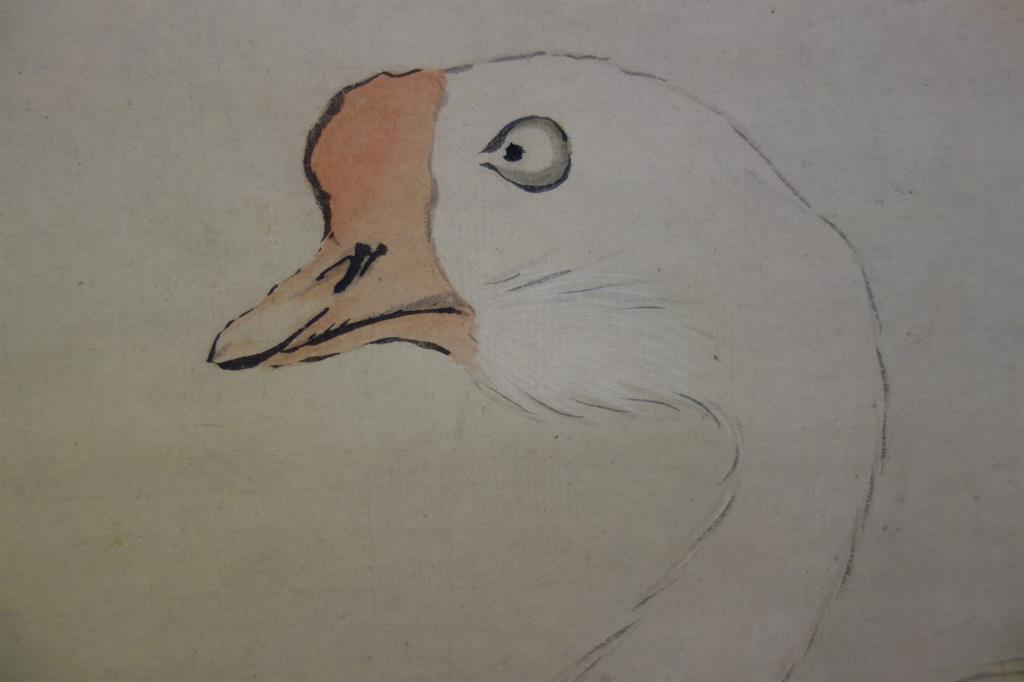 Zhang Chong was an artist active from the late Ming period to the early Qing period (the seventeenth century). His courtesy name is Ziyu 子羽. Zhang was born in the city of Nanjing. He mastered painting of different kinds of subject matter, including figures, landscape, and the bird-and-flower genre. He was said to be good at both expressive and meticulous styles of ink painting.

The goose was painted on the Lunar Day, May 1, 1641, at Chuixiang guan 吹香馆 (the Hall of Blowing Fragrance), which might be the artist’s guest house and studio. In the inscription to his painting, Zhang use the term “improvising” (manxing 漫兴), which is adopted from to a compositional style of traditional Chinese poetry. The term literally means “to compose arbitrarily when the mood comes up,” usually inspired by a particular scene, which is not intended to give a full description. The glance of a goose standing at the river bank staring at the distant landscape, was instilled with a poetic sensibility and emotion.

A water fowl standing by the riverbank is a familiar motif in the tradition of Chinese painting. The composition of Zhang’s painting recalls a Yuan dynasty painting Xifu tu 溪鳬圖 (Wild duck by the river) (1301) by Chen Lin 陈琳 from the Taipei Palace museum, which similarly depicts a wild duck by the riverbank. But there is perhaps more human-like emotional intensity in the eye of Zhang’s attentive goose, which is depicted as a half-circle with the eyeball almost protruding out from the head. The free-mindedness and caricaturistic quality of Zhang’s goose also resonates with the more simplified birds in the “ink play” (moxi 墨戲) works by Zhu Da 朱耷 (also known as Bada Shanren, 1626-1705) a century later.

Two seals of artist below inscription:

Four collector’s seals, including in the lower right corner: