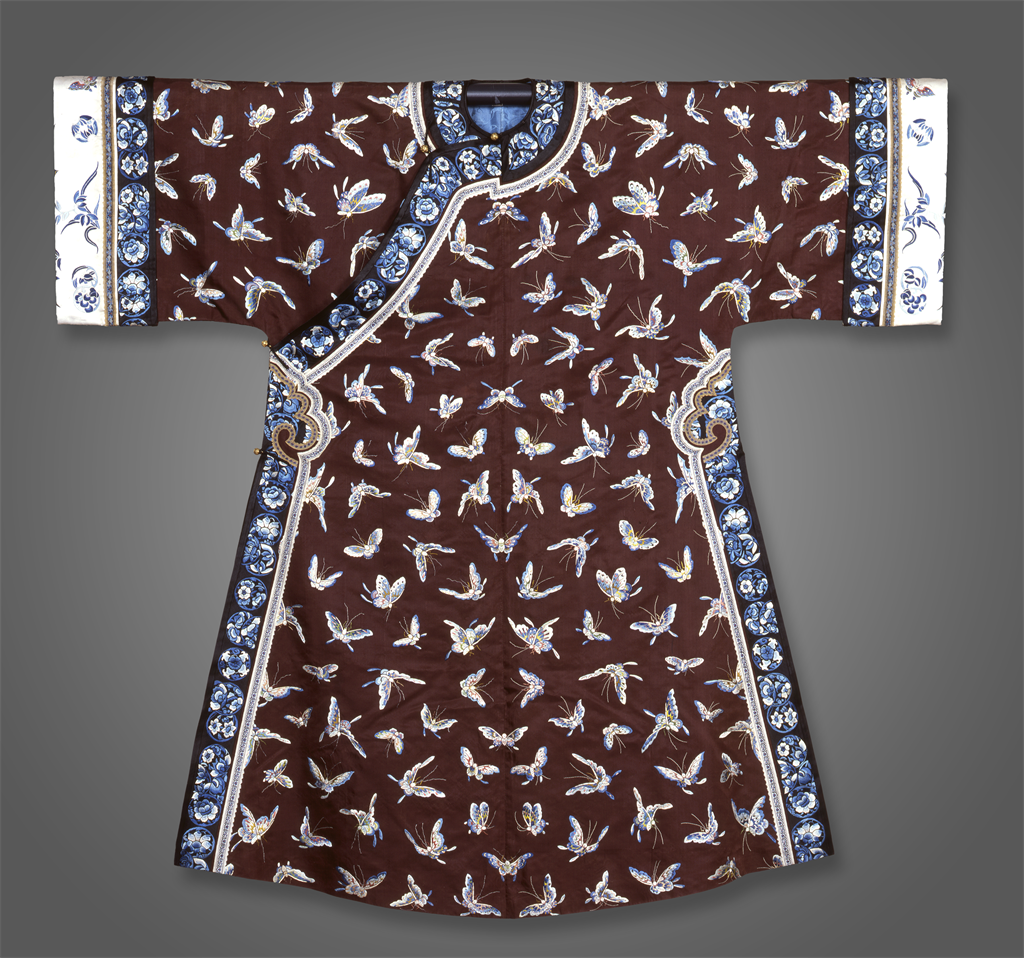 In late imperial Chinese culture, a butterfly was a symbol with many different meanings. The mythology of the butterfly comes from Chinese stories such as Liang Shanbo and Zhu Yingtai 梁山伯與祝英台 (sometimes translated as “Butterfly Lovers”). It is an image that is related with joy and happiness in marriage, as well as everlasting love. Most often associated with women, the butterfly was also interpreted as a symbol of longevity and old age.

Just like the butterfly, the craft of silk embroidery is an integral part of China’s cultural heritage. For centuries it had been a central part of Chinese visual culture. The brilliant colours and superb workmanship are only part of the reason that silk embroidery played such a central role in Chinese society, though. Politics, gender roles, social identity, apprenticeship, myth, and, as we have already glimpsed, symbolism of subject matter, also mattered.

Imperial dress was a vital part of defining imperial identity. During the Qing dynasty (1644-1912), an imperial decree dictated which style of dress people should wear based primarily on status, occassion, and gender. Female members of the court, for instance, would wear a chaofuor “court costume” to formal events. This was a robe with long sleeves which ended in hoof-like cuffs, and was embroidered or woven with auspicious and imperial symbols. Women’s informal wear consisted of two long robe styles: known as “changyi” and “chenyi”. The major difference between these two informal styles is that the changyihad splits up each side of the robe allowing for a greater degree of movement, while the chenyidid not. The ensemble would be completed with a long neck ribbon and long skirt - to avoid showing an inappropriate amount of skin. These were embroidered more freely. This robe is an example of a changyi.

The first step in creating a silk-embroidered informal robe would be to commission an artist to produce the pattern, which would be presented to the patron for approval. Once that was achieved, the designs were transferred with charcoal or chalk. These lines were then drawn directly onto the silk to serve as guides for the embroiderers. The needlework would then be meticulously hand stitched.

To create a high-quality piece, an embroiderer needed to split a single silk thread into 10-48 thinner threads and embroider layer after layer with threads of a variety of colours. A top quality silk embroidery piece could take up to six craftspeople several years to complete. One hundred generations of butterflies could go by in the amount of time it could take to embroider one hundred butterflies.